KBZ with first domestic credit cards in a decade

KBZ is set to issue the first true credit cards in over a decade, as the bank claims the Central Bank of Myanmar has given its permission to begin the service, according to a press release yesterday. 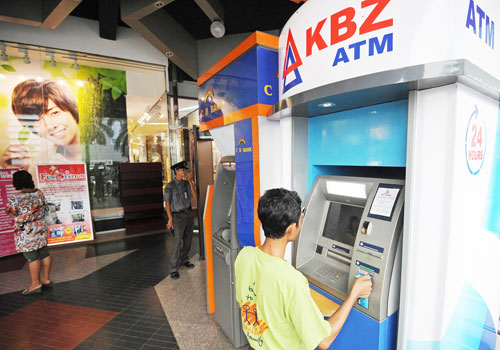 Credit cards can be used across the country at ATM machines and restaurants with point of sale terminals. They will be offered with a theme of “buy now, pay later”, the release said.

KBZ Card Department deputy general manager Daw Swe Zin Win said the interest rate will be 13 percent a year, though if customers pay back the principle within a set period of time, they will not have to pay interest.

“We plan to introduce other kinds of credit cards to our customer, varying on loan amounts and other factors,” she said.

Applications will take three or five days, with limits depending on the level of trust KBZ has in the customer. Most customers with loan and deposit accounts with the bank will quality, as will those who have a recommendation from an accountable person.

There are a number of credit cards operating in the country, though they function similar to debit cards, as they must be prepaid. Several banks were previously allowed to operate credit cards, though the Central Bank of Myanmar stopped the practice during the 2003 banking crisis when some of the country’s largest banks went under.

Card-based transactions have been slowly returning to the country. The Central Bank began allowing domestic banks to issue debit cards again in late 2012, resulting in the rapid growth of ATMs. Central Bank officials have also said they will allow some banks to offer credit cards, again depending on the strength of the individual financial institutions.

Yesterday, a Central Bank official based in Yangon said that protecting domestic banks is a priority of its oversight. Banking policies were too relaxed before the 2003 crisis, and many people made credit purchases at stores for which they had no capacity to pay, he said.

“This is the proper time to issue credit cards in amounts that are not dangerous for domestic banks,” he said. The official added that initially, credit will be limited to between K300 and K500,000 in order to keep risks low.

Other banks are talking to the Central Bank about offering these services shortly.

Myanmar has also announced plans to set up a credit bureau, though so far the bureau has not been put into place. It would allow different banks to conduct more thorough background checks on their borrowers.